Abstract, Physical and/or Uncertain -- An In-Class Timed-Write by Candice Hannini

In Samuel Beckett’s play Waiting for Godot, the two main characters, Vladimir and Estragon, present different views on life. The former takes on a more abstract approach while the latter a more concrete. Vladimir emphasizes the importance of being dependent, while Estragon believes that life improves with independence.

Vladimir often hints at deep meanings in objects, while Estragon sees things from a more superficial viewpoint. For instance, in Act I, Vladimir tells Estragon about the Bible. Vladimir remembers a story about thieves to which he concludes “Of the other three, two don’t mention any thieves at all and the third says both of them abused him” (Act I).  Vladimir questions the reliability of each source, hinting at his general belief in life’s uncertainty, and his interest in ideas and power. Estragon remembers only “The maps of the Holy Land. Calloused they were. Very pretty. The Dead Sea was pale blue” (Act I). He can only recall the aspects of the Bible that are easily found and noticed, and which are physical. His impression of the text is similar to that of a young child.

Vladimir believes that one must live life with dependence, while Estragon believes that life is best lived with a measure of independence. Vladimir claims that Estragon is his “only hope” and that without Vladimir, Estragon would be nothing more than a “heap of bones” (Act I). Vladimir’s emphasis on their dynamic signifies his belief in reliance upon others. Estragon, on the other hand, questions the benefits of their friendship. He tells Vladimir of his uncertainty about the two being meant for the same road or journey in life. By the end of Act II, Estragon says, “If we parted…that might be better for us” to emphasize his belief in creating one’s own path.

Although Vladimir and Estragon differ in some aspects, the two characters both claim that life is filled with uncertainty and that a passive mindset is better than an aggressive one. On multiple occasions, the men together allude to life’s uncertainty. Vladimir claims in the beginning that “nothing is certain when you’re about” and Estragon, in Act II, admits the same. Moreover, when the characters wonder about taking more action, they both conclude that it is safer to wait for Godot and stay put. 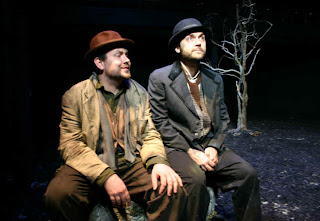 Posted by Andrea Kittelson at 11:25 AM