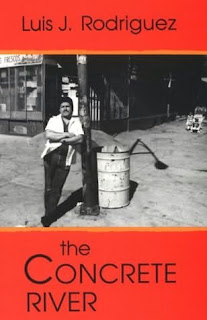 In "The Concrete River" by Luis J. Rodriguez, the speaker uses life-cycle diction, metaphor, and paradox to convey the belief that purity and corruption of nature and of humans are forever entangled in an industrial life.

The speaker employs diction related to birth and death to explore the relationship between good and evil as they manifest in life. When describing his experience with spray cans, the speaker says he wants to "suckle them" and "take deep breaths" even though he later "stop[s] breathing and die[s]." Suckling is an activity that babies do, and it is a way to gain nutrients. By suckling the contents of a spray can, the speaker is performing a contradictory action: ingesting unnatural chemicals in a natural way. The milk babies drink as youngsters fuels their development, just as the chemicals the speaker inhales via suckling influences his destruction. Additionally, the speaker's experiences with "plastic death" portray the process of living as being superficial. The speaker who lives in a "plastic," man-made world of industrialization is forced the grapple with the "haunting knell" of drugs and death while also aspiring to reach pure "virgin skies," throughout life.

The speaker also employs metaphors to explain the links between peace and chaos during life. The "mesh of barbed serenity" reflects the idea that tranquility is guarded, covered and overwhelmed by a different, stronger force, such as the force that causes the speaker "to burn." Additionally, mesh is a see-through fabric and by comparing serenity to mesh the speaker is implying that serenity can be seen, but not always fully reached. Furthermore, the speaker uses the idea that he is "your brother," "friend of books," and a "son," among other entities to mirror the journey of life that he wants to be on, instead of the one he is currently on that "breathes back life." Instead of living, he is "enticed...to burn" in a chaotic world.

Finally, the speaker uses paradox to showcase the dualities in life. The phrase "nightmares of wakefulness" explores the contradictory idea that people are most awake when they are dreaming. This suggests an intertwined relationship between the harsh reality of consciousness and the disillusion of unconsciousness. This idea is further explored during the scene in which the speaker is in "perpetual dreaming" and lives in his ideal world free from the shackles of oppression. The speaker wants to "reach the sky" at the same time that he wants to be "licked by tongues of flame." The speaker wants to both live and die, be in heaven in the sky and a flame-filled hell in the ground. His confusion between two worlds can be attributed to the spray cans he uses to explore the consequences of industrialization of not only nature but of man.
Posted by Andrea Kittelson at 11:40 AM