The Sum of Chaos -- A Scar Story -- by Gefen Laredo

It was a beautiful day, actually.  The warm Los Angeles sun had galvanized my predecessors (the normal skin cells) into a fervid frenzy of Vitamin D production.  They worked tirelessly, resulting only in a slight nuance of a different shade.

I scoff at their efforts!

Within seconds, I was, and have remained, darker than they would ever be.

But wait! I’m jumping the gun here.  Let me rewind and unfold this vignette from its beginning:

My master dashed into the ocean, boogie board in hand, ready to enjoy the thrill of the waves.  The waves seemed a bit large that day, and the farther out one went, the larger the waves got.

The thrill was too enticing!

My master went out as far as he could.  Wave after wave brought him to a point of sheer elation of which nature was the creator, the catalyst, and the culprit.  From beyond the shoreline, my master’s mother called him in.

“One more wave,” he promised.
He paddled out to the point where the waves were the largest, in search of that freedom brought about by the frictionless fluidity of the relationship between board and wave.  He saw the perfect wave forming out in the distance, and geared up for what perception has promised would be the ride of his life.

The wave formed and formed and didn't stop forming. By the time it reached my master, it was too late to duck under, and too large to board.
At that moment, through the relatively tiny lens of a wave, nature asserted her dominance. She flung my master, not out of her realm, but deep into her ice-cold castle, where a myriad of chaotic events was to ensue.  The water muffled the sound from the thrashing wave, leaving the current that was responsible for my master’s fate. The current sucked him under, holding him tight.  As the rip current further formed, my moment was soon to come, but not quite yet!
The relationship between board and wave did not change; it was as effortless and synchronized as before.  However, my master, hoping to revel in this ease, was now condemned to suffer it.

The board rode the current as swiftly as it had before, but this time with no rider to please. As a horse frees from its reigns, this board took its revenge on its absent rider. It thrust itself into my master’s stomach, sending his back directly onto the sand.
Bam! I arrived!

This was not necessarily the picture-perfect conception you humans are accustomed to -- I mean I wouldn’t consider it a run-of-the-mill orgasm where the two creators lie in locked eyesight, and you can cut the love with a butter knife?  Oh, how I wish I were created from love!  But I wasn’t!  In fact, I loathe the day of my creation.  I was the sum of chaos.  I was conceived from pain, and in a sea of shame I would remain.
My master cringed at the sight of me.

Imagine your father looking at you and wishing you had never been born! Not only was I the sum of chaos, but I was the product of a kind of death -- the death of my master's fearlessness.

Out of shame and embarrassment and death, I had risen.  I was born a crevasse -- an absence of life -- that eventually took form.

Through tireless efforts, even through the suppression of those G-d-for-saken ointments that my master applied to rid me of my being, I did not grow, I thrived.  I look back at that crevasse from the top of the mountain where I now stand, where the detriment of success plagues me.
We are likely to believe that our lives have purpose.

I wish I knew mine!

I am an imperfection of shame in a sea of orderly cell production. The worst part is, however, that I am to remain just a blemish. My master has no love -- no outward nor inward appreciation -- of my potential. I have forever earned the shame of my father, my bearer, my creator.

I cannot shake, however, that unavoidable sense of pride we all feel in accomplishment, even in a world void of love. 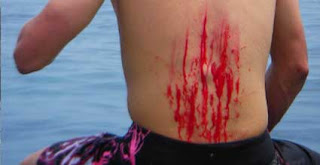 Posted by Andrea Kittelson at 10:46 AM